5 x LYG Cross Country Champion Sabrina Sinha: “The Most Important Thing Is To Enjoy It” 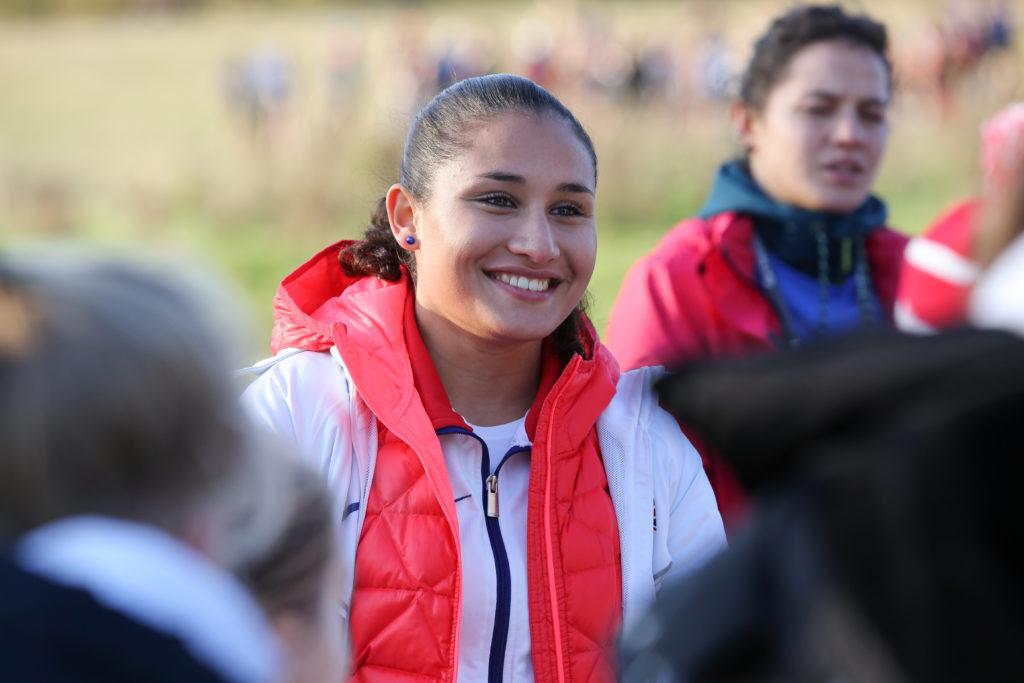 Sabrina Sinha is a former five-time London Youth Games cross country champion and GB Junior International for cross country and track. She is currently part of British Athletics Talent Hub at the University of Birmingham, where she is also studying for a degree in Geology.

We caught up with the talented athlete from Greenwich to find out how she got into running, what she enjoyed most about competing at LYG, and what advice she would give to young runners hoping to follow in her footsteps.

Q: How did you first get into running?

I would love to say it’s an interesting origin story but quite simply I followed my sister to our local running club. I was around 10, maybe a bit younger. I actually did my first cross country race under my sister’s name because I was too young. I probably shouldn’t admit to that, but that was my first race. I came in the 100s as you do in cross country and I really enjoyed it. Running always came naturally to me. I just loved the freedom of it.

Q: Were you interested in other sports when you were younger?

I was swimming before I started running. Even when I became a runner, I was still swimming for a long time. I competed at the London Youth Games in swimming as well as cross country. I got to regional level. I won some county medals as well. I did well but I don’t think I was ever quite the same as when I was running.

Q: What are your memories of competing at London Youth Games?

I will always remember Parliament Hill. It’s one of the toughest courses on the cross country circuit. The National Championships are also there. At least at the London Youth Games, you get to start half way up the hill!

Honestly, I have so many fond memories from London Youth Games because as much as it was competitive it was such an enjoyable atmosphere. It was really nice for me to get to compete with my teammates from my running club and from my borough. I’m still really close with a lot of them now. I think that’s the biggest thing, making friendships at such a young age and having shared those experiences, whether it’s plodding round a muddy Parliament Hill or doing various different sports at Crystal Palace.

Q: How did London Youth Games help prepare you for future competitions?

When you’re younger any competition is important but that’s especially true in London where you can’t help but to have that quality. Most of the people I was competing against at London Youth Games, I was also competing against at county and national level. At London Youth Games you were definitely getting the level of competitiveness that you would get at national level but in a friendly environment. You were learning to be competitive, but enjoying it, which is the main thing.

Q: You came back to London Youth Games in 2019 to hand out medals to the cross country winners, what was that experience like?

It was an honour. To see all those kids being where I was all those years ago. It takes you back to why you started. When you have all the energy in the world and you just want to run. If I can inspire even just one kid to enjoy the sport then that means so much to me. That makes all the really tough days where I wanted to give up and I’ve questioned why I’m pushing myself through all of this, worthwhile. It’s an amazing sport and part of being an athlete is having the highs and lows. It gets very tough. Especially when you get to the age I am and you’re trying to make it at a senior level. You have to remember why you started it in the first place.

Q: What advice would you give to young runners starting out?

The most important thing is to enjoy it. If you’re not enjoying it then why are you doing it? Doing sport is about the journey, rather than all the awards you win or the PBs you get. Going out and feeling that sense of freedom and being able to run as fast as you can. As long as you’re enjoying yourself and you love what you’re doing then you’re doing it right, no matter where you come. You should also make as many friends as you can. All of my closest friends are runners. They’re so dedicated to what they do and being around people like that you can’t help but not be inspired and proud of them and proud of yourself.

Q: What are you hoping to achieve next in your running career?

I would love to get closer to being at the top nationally. Getting more PBs would be nice. Hopefully next summer there is European U23 Championships, if it goes ahead. It would be a stretch but it’s possible that I could make that. That would be my goal and dream for the next year. But like any athlete the dream would be going to the Olympics. I like to believe it’s not impossible. I will certainly work hard for it. It’s a long way off but it’s the ultimate dream.