HISTORY MADE ON DAY 1 OF LONDON YOUTH GAMES, PART OF THE SCHOOL GAMES, SPRING FINALS 2019! 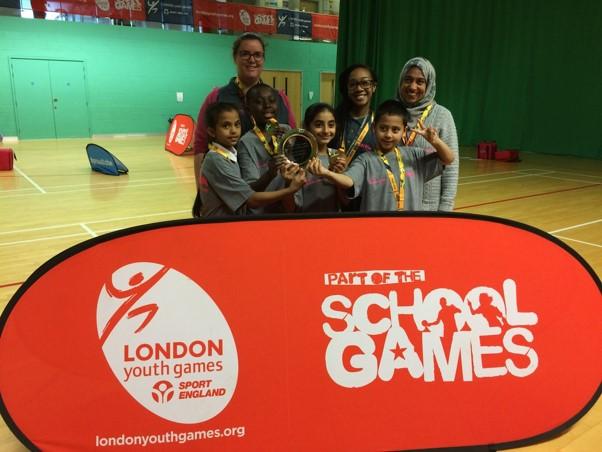 The London Youth Games 2019 Spring Finals got off to a fantastic start yesterday, with hundreds of young Londoners descending on Redbridge Sports Centre for a fun-filled day of sport.

For the first time in LYG history, New Age Kurling was offered as a competitive sport with Sandringham Primary School (Newham) crowned the inaugural champions.

Netball was won by Bromley High School (Bromley), who remained undefeated throughout the competition, with a 15-0 victory, their best performance of the day. Competition Director and President of England Netball, Lindsey Sartori, noted that she was incredibly impressed with the standard of play across the teams and hoped to see some of the girls in future England Netball squads.

A single goal gave Bedonwell School (Bexley) the victory over Canonbury (Islington) in the Y56 Football finals. The Respect the Games Award was won by St Mary’s (Havering) who will also receive a signed t-shirt donated by the Lionesses (England Football Team).

In both Boccia competitions, Croydon finished on the podium in second place with Richmond and Grove Primary (Redbridge) pipping them to the post in the Open and Schools competitions respectively.

Fanfest proved popular as ever with 22 primary schools taking part in fun activities around site from upbeat Zumba sessions to battling it out during Wild Slyde (a competitive resistance sliding activity created by the first winner of the UK version of Gladiator). Other activities included Boxing, Parkour, Urban Handball and an Activity Zone.

Day two of Spring Finals is set to be another great day with the official Opening Ceremony kicking off the proceedings. There will be performances from our KS3 and KS4 Dance competition winners and appearances from two prominent people from the world of England Netball, Pamela Cookey, former England Netball Captain and Kadeen Corbin, current England Netball player and LYG alum.

Make sure you’re following us on Instagram, Twitter and Facebook to keep up with all the action throughout the day. You don’t want to miss out!