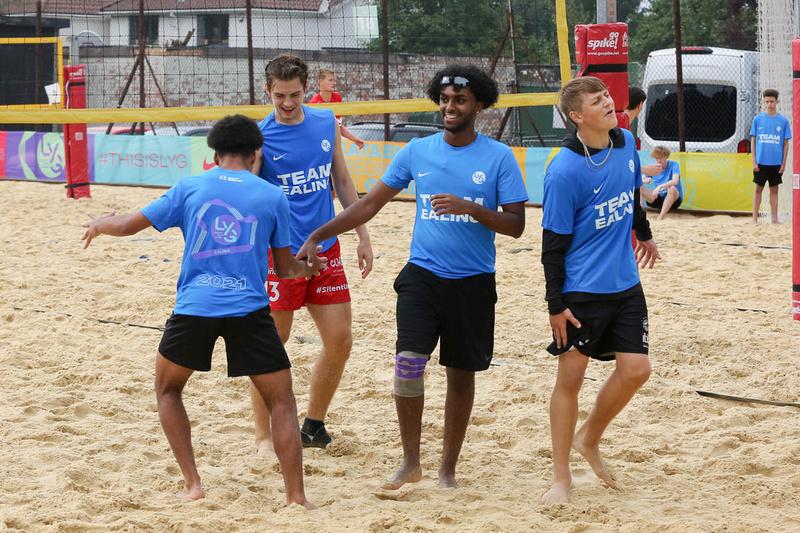 Host borough Wandsworth claimed gold in the Netball tournament with Lambeth winning silver and Richmond taking home bronze. “We did really well,” said Ella, 15, captain of the Wandsworth Netball team. “We worked really well as a team with lots of positive attitudes. London Youth Games is great. Everyone is so friendly, and the environment is just amazing.”

“The girls absolutely smashed it, on the court and off,” added Team Manager Emma Toft. “So much of the London Youth Games is about the team culture, building friendships and having a good time. The girls nailed that today. It’s been fantastic that London Youth Games can happen this year. It’s been a difficult 18 months for everybody, particularly for teenagers. Having this event at the end of all that is brilliant. Great atmosphere, great vibes, and getting young people active again, what more could you want!”

Hillingdon finished in top spot in the Girls Football tournament. The team, led by captain Ruby, played some excellent football to see off silver medallists Bromley and bronze medallists Wandsworth.

“I think we played really well,” said Ruby, 14. “We talked a lot, we passed the ball quickly and put pressure on other teams. It feels really good to win the gold medal because we worked really hard, and I think we deserved it.”

“The girls were fantastic,” said Team Manager Jimmy Creedon. “They played as a team from start to finish. They worked for each other, they linked up well and they showed good spirit on and off the field. They had a really good day, they enjoyed the tournament and did really well.

“The London Youth Games is fantastic for women’s football. It puts them on a platform and gives them an opportunity to show how good they are. It’s been a really well-run tournament and the refs have been fantastic. It’s a super event. Long may it continue.”

Hammersmith & Fulham were undefeated in the Boys Football tournament. They drew one and won the rest of their group games to set up a final showdown with Richmond. The boys from Hammersmith & Fulham won the final to capture gold, leaving Richmond with silver and Lambeth, who won their third play-off game on penalties, with bronze. HHam

As a whole, I feel that the team played really well,” said Hammersmith & Fulham captain Kevar, 14. “We conquered the whole division and won gold. London Youth Games is good because shows that there is a lot of talent around the London boroughs.”

Wandsworth built on Saturday’s success with a further three gold medals on Sunday.

The Girls Street Cricket team finished first ahead Lambeth and Hillingdon to claim gold. “We did really well as a team,” said captain Scarlett, 15. “I was very impressed with everyone. London Youth Games is just such a good atmosphere. Everyone is really friendly and it’s just all round a lot of fun!”

“We played really well. We took all our opportunities and didn’t make too many mistakes, so I was pleased with how we played,” said Thomas, 18. “Our coach Nikki Strachan put in so much effort for the team and is a big part of our success.  I love how well organised the London Youth Games is. How everything runs so smoothly, and you get to play against different London boroughs. This is one of our first tournaments back after Covid. It feels so special. It was such a shame not to be able to play over the last months so just to be back felt so good. It means a lot to me and the rest of the team.”

At St Dunstan’s Southwark captured their first gold of the weekend in the Girls Hockey tournament on Sunday. Southwark finished in first place ahead of Wandsworth who claimed silver and Kensington & Chelsea who won bronze.

Visit www.londonyouthgames.org to find out more.