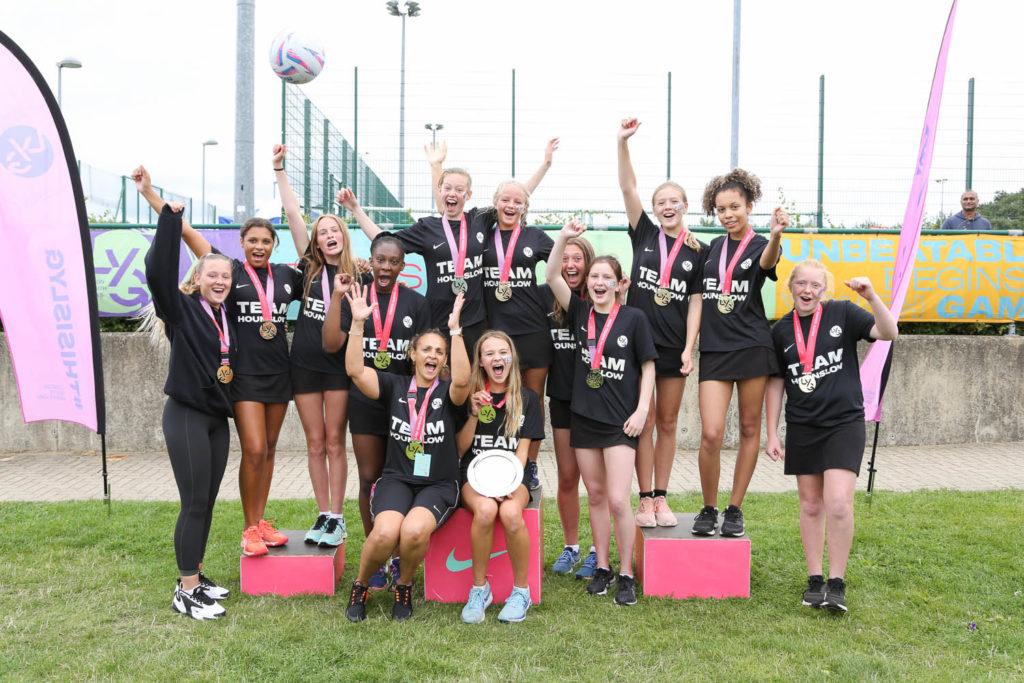 Young people from across West London came together to represent their Boroughs and compete in Hockey, Netball and Football competitions at the London Youth Games 2021 West Regional Hub Day at Brunel University in Hillingdon on Saturday 28th August.

Hounslow won gold in Netball, winning four games, drawing one and losing one to take top spot ahead of host borough Hillingdon, who finished second, and Ealing, who finished third.

Isabel, 14, from Hounslow said: “It feels amazing to win a gold medal and to come this far as a team. We know we’ve deserved it with all the hard work but to win is a dream come true.

“The experience is great at the London Youth Games. There are so many different teams here. You get the chance to play people not just from area and you can really enjoy the sport of netball.”

Hounslow’s Team Manager Nina Bardowel, added: “It was an incredible performance from the girls today. It’s the first time we’ve won gold, we’ve won a silver and a bronze before. It’s been a little bit different this year due to Covid but the commitment was 100% today and I think that helped. Some people have actually flown back from Spain today and are going back tonight!”

Brent’s football team were crowned champions of West London. Finishing top of their group, Brent went on to beat Camden 1-0 in a closely contested final to claim Gold.

Team manager Darius said after the event: “The boys did really well. We started of slow but then really got into our stride and after the first game we never looked back.

“The London Youth Games is a great competition for young people. It gives players who are not in academies the opportunity to showcase themselves and gain experience of playing at a higher level.”

Brent’s gold medal winning team are following in the footsteps of Manchester City and England international Raheem Sterling, who captained Brent to victory at the London Youth Games in 2009.

Westminster won Gold in the female Hockey tournament with Ealing finishing second and Hillingdon in third.

“I just loved the atmosphere,” said Honor, 13, from Westminster.

“This was the first hockey tournament I’ve done in a long time because of the Covid restrictions so it was really nice to be playing again and to finish with a gold,” added teammate Imogen, 13.

Westminster also won the Respect The Games award for the Netball and Football competitions. This award is voted by the other teams and is awarded to the borough that best exemplifies the London Youth Games values of Fairness, Ambition, Inclusion and Respect.

Hillingdon claimed silver in the Netball tournament, finishing behind Hounslow who won gold, and ahead of Ealing who took home bronze. Both male and female Hockey teams finished in third place and were awarded with bronze medals. Hillingdon’s football team also won bronze.

The Mayor of Hillingdon Cllr Roy Chamdal, who was in attendance supporting his Borough’s teams, said: “Thank you to the London Youth Games for coming to our wonderful Borough of Hillingdon. Finally, we can get back to some sort of normality. All the smiles on the kids’ faces and the smiles on the parents’ and spectators’ faces, it was an absolute joy to see. For the Borough it’s great to host an event like this and to be able open our doors once again and invite our guests in.

“The standard is absolutely amazing. We forget these are 11, 12, 13 and 14-year-old children yet they are playing like professionals. The commitment, the enthusiasm, and the fair play is absolutely great to see.”

“I was meant to be playing in defence but two of our keepers were on holiday, so I was called up to play as a goalkeeper instead,” said Arvin, whose penalty saves helped to secure Ealing’s gold medals.

“It felt really good to save a penalty in the final. I tried to stay composed and look them straight in the eye to give them a little bit of fear.

“This is my second time competing at London Youth Games. I played outfield last time and we didn’t quite achieve a medal, but we did this time and it’s gold!

“I like the vibe and how everyone is so friendly and supportive at the London Youth Games but then when you’re playing it’s really competitive.”

Ealing’s female Hockey team won silver, finishing behind Westminster who won gold, and ahead of host borough Hillingdon who claimed bronze. While, in the Netball competition, Ealing’s team won bronze, with only goal difference separating them and silver medallists Hillingdon.

Ealing’s Football team finished in sixth place but were presented with the Respect The Games Award for their sportsmanship.

The Mayor of Ealing, Cllr Munir Ahmed was in attendance supporting his borough’s team.

“It’s been a brilliant day,” said Cllr Munir Ahmed. “I’ve enjoyed coming here and watching the London Youth Games. It has a huge impact on the health and wellbeing of children. After 15 months of lockdown, it’s important that youngsters come out and socialise and play these games.

“It’s been a pleasure encouraging my borough teams. I had the pleasure and honour of watching our netball team win bronze, our boys hockey team win gold and our girls hockey team win silver, so it has been a brilliant result for Ealing.”