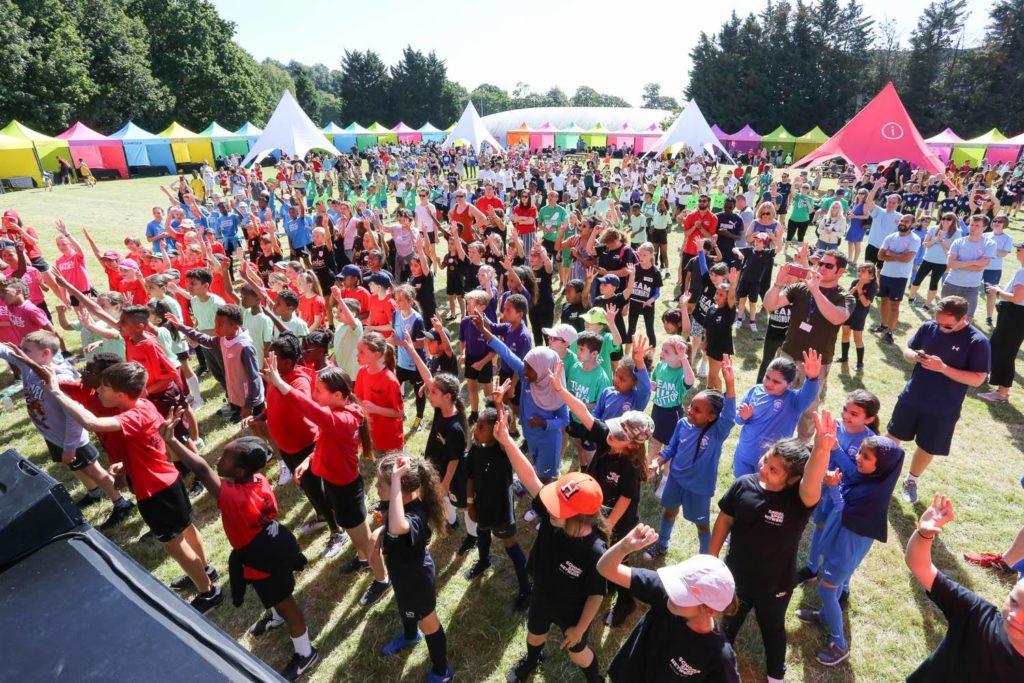 On Thursday July 4th, over 2000 young athletes took to Crystal Palace to compete in the 2019 London Youth Games School Games Finals: the first event of the annual three-day celebration of young people in sport.

Kicking off the School Games Finals was the official Opening Ceremony  hosted by resident LYG MC, Damien Anyasi. During the opening ceremony, the winners of this year’s LYG’s Got Talent competition (Hillyfields Academy) performed and the Respect The Games and Schools Shield trophies were awarded to the winning boroughs: Newnham and Haringey. 2019 marks the sixth year in a row that Haringey has won the Schools Shield trophy. Can they be beaten?

We were lucky to be joined by Jordan from At Your Beat – a dance and fitness studio – who got the young athletes (and volunteers) ready for the day’s action with a mass dance celebration.

Richmond (Lowther) retained its title in the Basketball Mini competition – a feat matched by the Female team in the Open Basketball Finals held on the Saturday of Finals Week. Barking & Dagenham (St Teresa’s) came second and in joint third were Manford Primary School (Redbridge) and Harrow (St Teresa’s)

Richmond’s dominance continued into Gymnastics where they held onto the title of Key Steps 2 Champions as well as adding Key Steps 3 Champions to their list of accolades. In the KS2 competition, Ealing (Little Ealing) came second, with Harrow (Norbury) in third place. Just one point separated first, second and third place in the KS3 competition. Lambeth (Granton) took the silver and Haringey (Coldfall), the bronze with 0.2 points between them.

In the Tennis Mini Red competition, Haringey (Coleridge Primary) went undefeated in all of their games to take the victory and in Tri-Golf, Merton (Poplar) took the Gold for the fourth year in a row.

The SSE Wildcats Football Festival was the newest addition to the London Youth Games School Games Finals. The festival saw over 200 girls in Yrs3 & 4 participate in eight sessions throughout the day, all of which were designed to provide the girls with a safe place for girls to try football for the first time and develop key skills. Thank you to our volunteers from Eastbury Comprehensive who helped to make the festival an enjoyable experience for all.

Thanks again to Crystal Palace National Sports Centre for accommodating us and thanks to all of our volunteers for helping to make School Games Finals a huge success! To see all of the photos from School Games Finals, head over to our Facebook page.