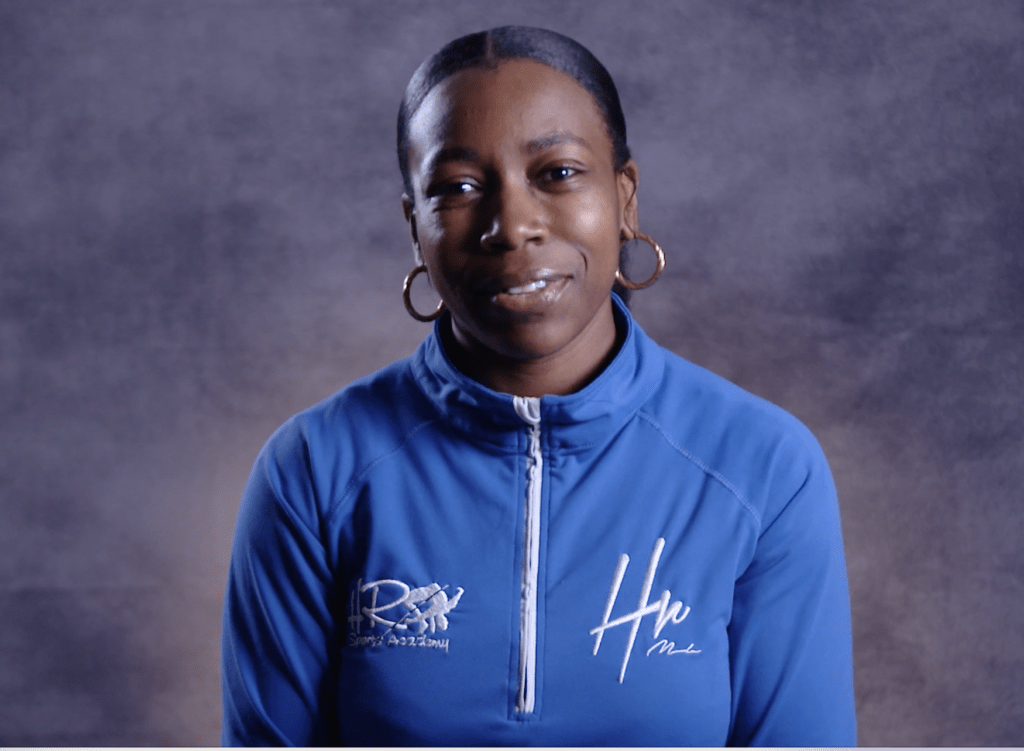 The youngest ever Chair of the London Youth Games says she is determined to inspire more young women and girls from under-represented backgrounds to step forward and take up positions of responsibility and leadership following her appointment.

In a powerful short film being broadcast by Sky Sports, Mickela Hall-Ramsay – who was appointed Chair of the pan-London Games aged 34 in March – explains how the Games can play a vital role in helping young people recover from the Covid-19 pandemic, especially those facing inequality and disadvantage.

“Sport is an important way out of hardship,” she says. “I believe there has been an absence of role models, especially for those who have been under-represented. I want to empower women and girls to be involved in sport and in leadership roles.”

During the film, Mickela talks about some of the issues that she witnessed growing up in the North London borough of Haringey, including serious youth violence, crime and cuts to youth services.

“For me Haringey is home,” she says. “I love it here because it’s where my family is, it’s where my friends are – I know it like the back of my hand. However I am not oblivious also to the deprivation that is within the borough.

“There’s definitely a combination of pride and sadness. The sadness comes from seeing many young people at risk; the pride comes from walking past Spurs’ stadium and see what sporting heritage is within the borough.”

Mickela is also the first Chair to have actually participated in the Games, which began in 1977. She competed for Haringey at London Youth Games in 2000, 2002, 2003 and 2004, winning Gold in the female basketball competition each year. She has also volunteered at the Games and managed Haringey’s female basketball team in 2013 and 2014.

It was whilst studying for her Masters degree in Sports Management that Mickela conducted research on how sport can positively develop young people. Then in 2008 she was inspired to act by the sudden death of her sister who had Down’s Syndrome, and the rise in youth gun and knife crime in and around her borough, to set up HR Sports Academy which was aimed at benefitting young people in her community.

“I really hope that my appointment will allow people to see that I am an authentic voice that will be there to speak for them and represent them. I think the disengagement that young people have with authority comes with relatability. I feel if you are unable to relate to somebody then you are not going to want to be around them and you are not going to listen to them.”

As restrictions around sport and physical activity are lifted, Mickela says she is excited by the opportunity “to bring young people back together, back to sport, and back into an environment where they’re able to use sport to help them mentally and physically to become themselves again”.

The London Youth Games see on average 100,000 young Londoners participate each year, and even during the recent lockdown there were 80,000 entries into online activities such as the Virtual Inclusive Games and the Virtual Dance Project.

Mickela says Games organisers are committed to making activities accessible to all young people, especially those facing disadvantage. Subject to Covid restrictions, forthcoming events include tennis and sailing during June, with basketball, BMX, kayaking and road cycling to follow in July and August.

Even more sports – such as street cricket, hockey, netball, football, archery and beach volleyball – will be provided at ‘hub weekends’ as the action hots up during August and September.

The Games are funded and supported by the 33 Boroughs of London, London Sport, Sport England and Nike.

Mickela says: “As Chair of the London Youth Games, I want to make the Games as accessible to as many young Londoners as possible.”

The release of the charity’s new 2021-2025 strategy ‘Every Young Londoner’s Games’ sets out the vision to create the world’s largest and most inclusive city-focused Youth Games, that is accessible to all.

You can watch the full interview here: https://www.skysports.com/more-sports/news/29877/12311797/london-youth-games-chair-mickela-hall-ramsay-determined-to-take-sport-to-the-masses